Due to COVID-19 shipping times may vary. 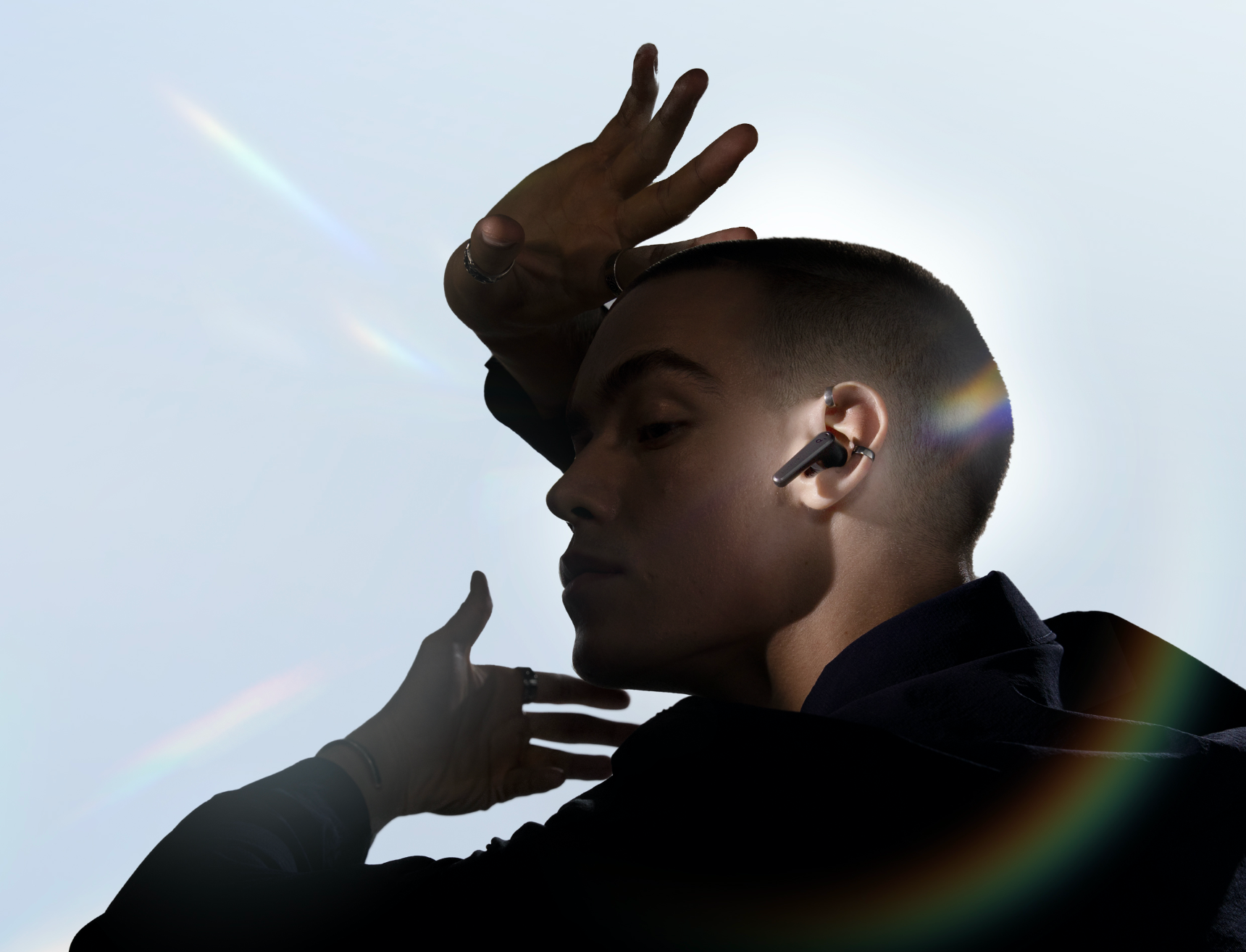 To ensure the most accurate and intense sound, Liberty Air 2 Pro’s drivers have been coated with 10 hardened nano-layers. This extra stiffness gives your music 45% more bass and a 30% wider frequency bandwidth, all without sacrificing clarity and definition.

You Ain’t Heard
Nothing Yet 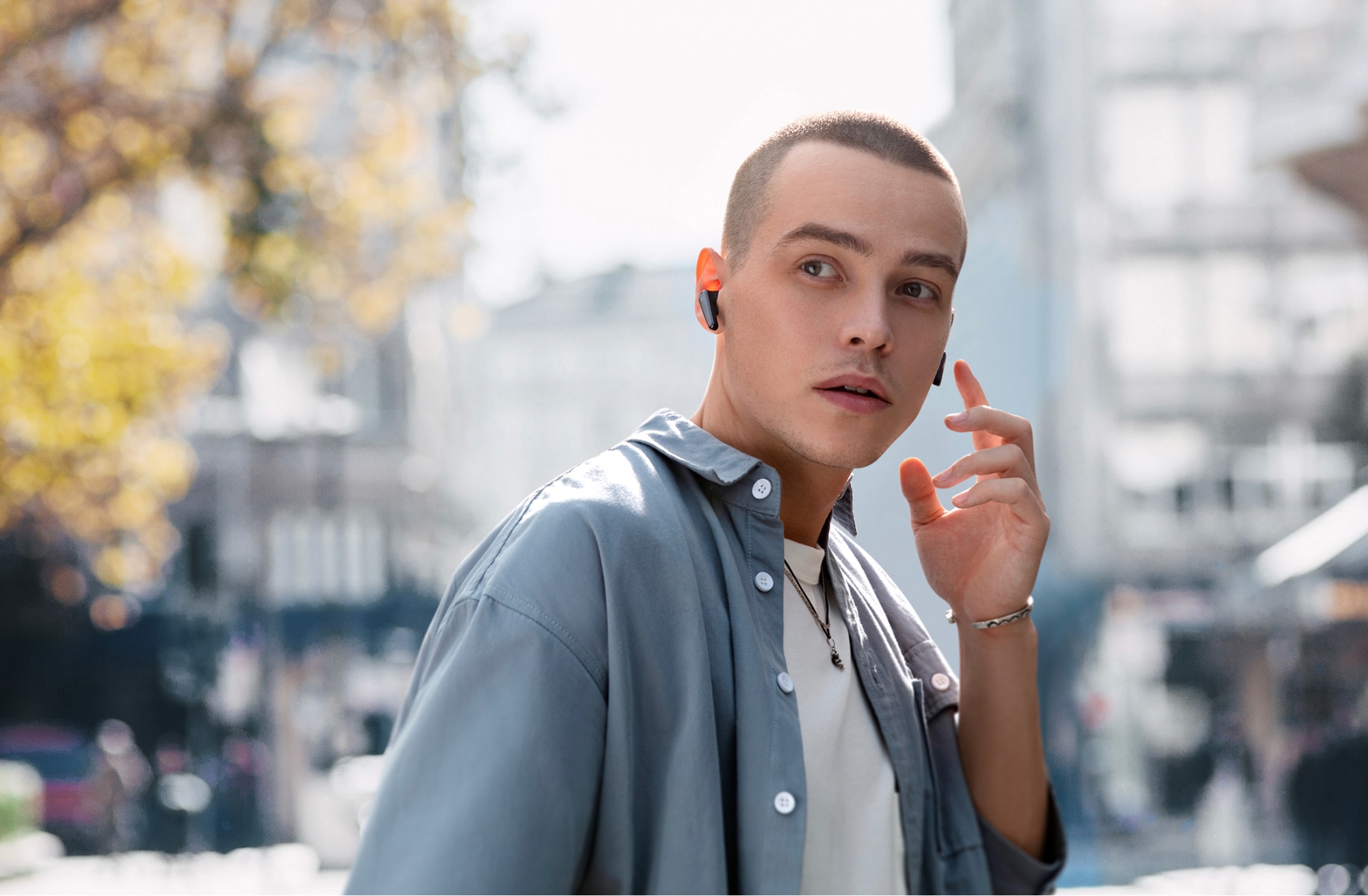 Transport mode is optimized to target the roar of engines, traffic, and public transport. Reducing up to 90% of noise on your commute can make it 100% more bearable. 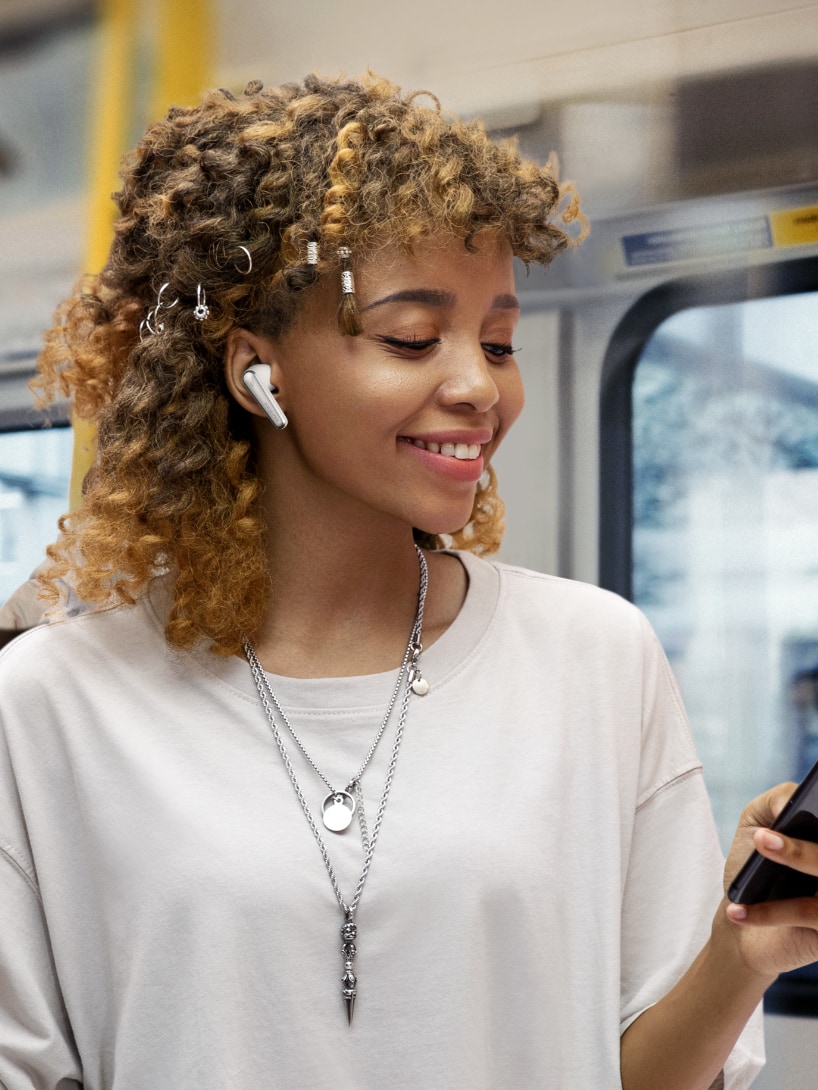 Outdoor mode targets low and mid-frequency sounds to keep the city quiet while you stay safe around traffic and other hazards. 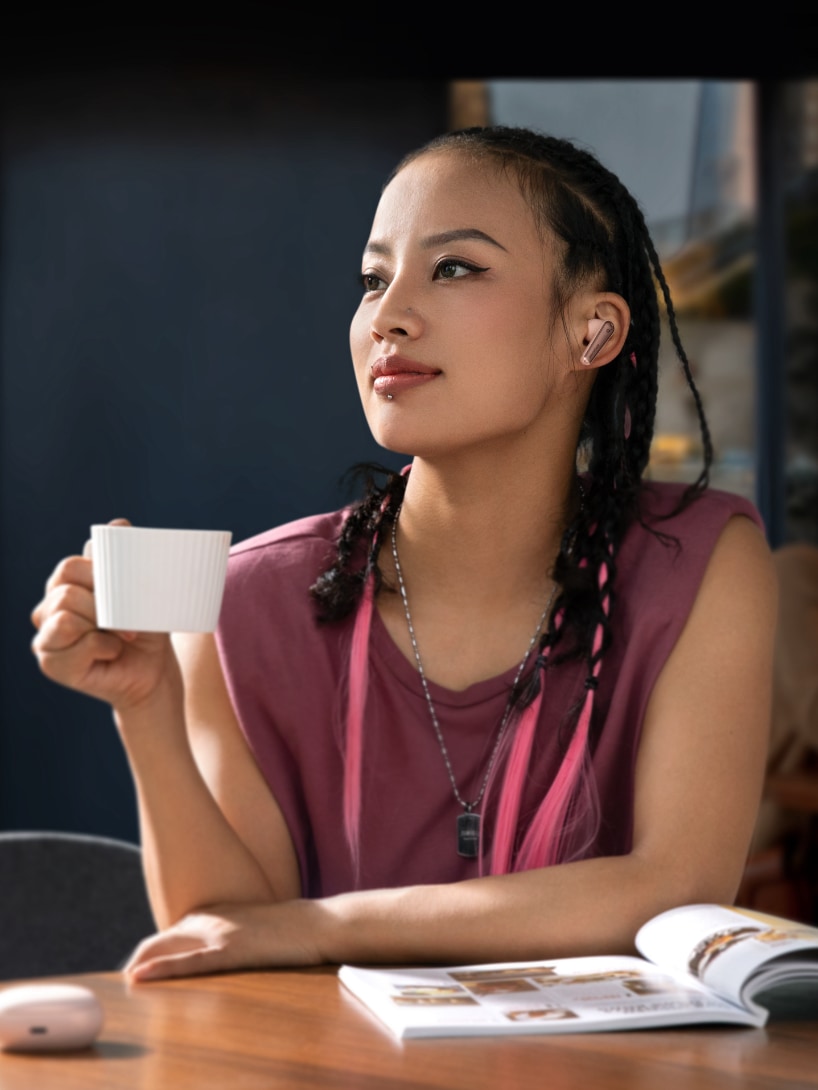 When you’re in a coffee shop or the office, Indoor mode will target and cancel human voices and chatter. All without that hallmark ear pressure from noise cancelling.

An hour of listening every day for a week, all without needing to recharge.

Get almost 3 full charges
from the matchbox-sized charging case.

Charge for 15 minutes for 3 hours of listening via USB-C.

Put the charging case on any Qi-Certified wireless charger for hassle-free power.

Fit In, Stand Out

Liberty Air 2 Pro are ergonomically designed to fit all ears perfectly. Choose from nine pairs of super-soft-silicone eartips to get the perfect sound and noise cancelling performance. From now on, it’s just you, the music, and no ear niggles that remind you you’re wearing earbuds. 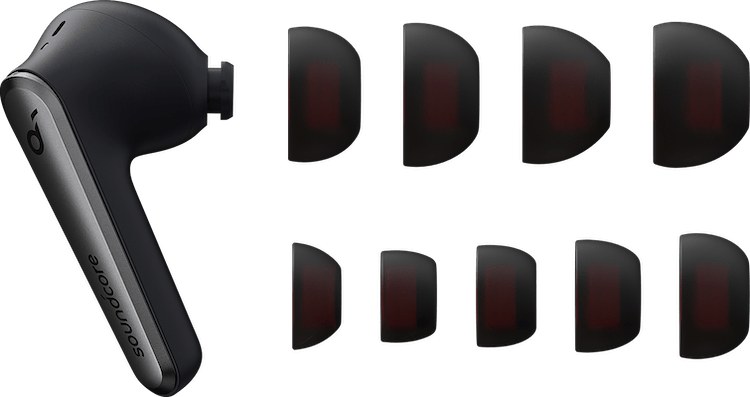 Adjust the touch controls on either bud to suit your most used functions.

Take complete control of the EQ to tailor the sound exactly how you like it, or choose from 22 pre-programmed settings to make your music shine.

In the unlikely event that there is something more important than your music to listen to, toggle transparency via the app.

What’s In The Box
Tech Specs 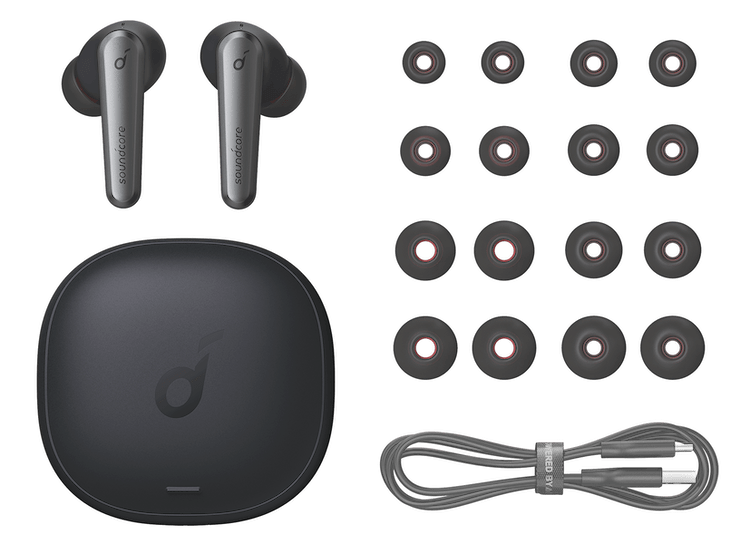 As someone who has had severe hearing loss, it goes without saying that I have a hard time with hearing. Shopping locally wasn't an option living in such a small community. I spent Hours (literally) watching YouTube reviews on different over the ear headphones. I had a budget of $150 CAD.

Many of my searches brought me to Soundcore. More specifically the "Life Q30". I found a link on Amazon for $109 plus shipping, I sent it to my wife who not only had found free shipping but an additional $10 off! SCORE! $115 to my door. 9/10

After a short charge they were easy to Bluetooth pair. 9/10 on ease for Bluetooth pairing. I have still to figure out the "easy NFC quick pairing 3/10".

Listening to my wide ranges in Genre was amazing with the first use. I figured out the Noise canceling easily 10/10. The on headphones volume gets a 6/10 ( very loud plastic click at the press of any of the buttons on the headphones). The location of buttons on the right ear cup work well for thumb operation. As well as the "touch" for changing between Noise Canceling modes.

Back to my hearing. Left ear is at about an 85% hearing loss. Right is maybe 7-10% loss. I am able to adjust balance for an "optimal" sound that I even find turning the volume down, not for sound distortion, but just because the over all high volume.

Until you have had hearing loss like I have, you might not understand how grateful I am to have found a great affordable sounding headphone.

The "Transparency" mode without music is actually great compared to what I'm use to. I actually hear more from my bad side while using the Transparency mode. It's great!. The audio is digital, it reminds me a little of how a hearing aid would sound (similar).

One of the biggest benefits of the headphones is I can pair them with my TV, as my wife watches at a lower volume that I can't hear on the TV, I can pair the Q30's at the same time! We both get the volume we need! I NO LONGER HAVE TO HAVE THE TV SCREAMING FOR ME TO HEAR IT!!!

Bass is incredible! Nice case and recharge is simple and quick. Volume touch control doesn’t work so well. I replaced the Apple AirPods with the Anker and am glad I did.

S
Shane
Great sound and features but not the buds for me.

In short. A good set of buds with lots of features and great sound but not suitable for long term wear in my ears.

The long story. I bought these hoping for an affordable headphone with good sound and 6-8 hours of wearability as an option to Apple EarPod and AirPods, which I cannot wear.

They pared right away. Were recognized by the app and updated all with no problems.
The sound was on par or better than most headphones I have used and the noise canceling was acceptable.

I love the automatic pause when you take one or both of the buds out of your ear.

I used the factory installed medium tips. The sound testing in the app called then a good fit but I couldn’t go but a few minutes without feeling like the buds were slipping and had to reseat them in my ear. Additionally after about 2 hours I started to notice discomfort in my tragus and befor 3 hours I had to take them out because of the pain.
Possibly the unsecure feeling could have been fixed with a larger tip, though normally I use a medium to small tip for my smaller ear canal, but I don’t see a solution for the discomfort and pain I had with long term wear.

Love them. I'm working from home like so many others now, and I really enjoy the ANC feature. U like some other reviews, I've not had any real issues with it.

At times during video conferencing I have noticed some limited clipping and other unsatisfactory noises, but this is usually tied to the way the person speaking is using their microphone or audio settings on the device I'm using occasionally auto adjusting to max volume.

I use these primarily for video conferencing and the ANC function while at work, and I've developed the habit of popping them in the charger a few times a day now. They don't need the charge all that frequently, but initially I was only putting them on the charger after I wrapped up my day and noticed that around hour 5 or 6 they'd die on me if I wasn't trading which one was in the charger. Now I just pop them in the charge case after a long call and they're ready whenever I need them.

To test them out a bit, I did listen to some music with them, and I really enjoyed the audio quality in that capacity as well. I'm not an "audiophile", but I do appreciate a full, deep sound in the music, not the tinny "flat" sound you can get out of cheaper speakers and headsets. I listened to some Daft Punk and Galantis through these, and it sounded great to me. I like the idea of the app and the customization you can put into the EQ on your audio, but I've not really messed with it much. I primarily use Shuttle music player for any of my music which also has built in EQ adjustment, and as I mentioned earlier, I'm mostly using these for video conferencing.

I have not used ANC devices before, so there may be better units out there, but I have really enjoyed the ability to pop them in and minimize the overall sound clutter that goes on in an occupied house when I need to focus on work.

I also liked that there is a wide range of ear cushions allowing you to get really granular with ensuring the right fit. I found the best results from mismatching two different sizes.

I've been buying Anker products for a long time, and like mostong time customers of theirs, I'll say the quality does not disappoint.

I think they’re better than AirPods Pro the only thing I don’t like is that I use them when working in construction and when the machine is on they make a creepy sound, but for normal use in the street they’re excellent